The Arabian Magazine Discovering the true heart and soul of the Arabian horse
Home Performance The Girl with the Jumping Arabs: A Quieter Month 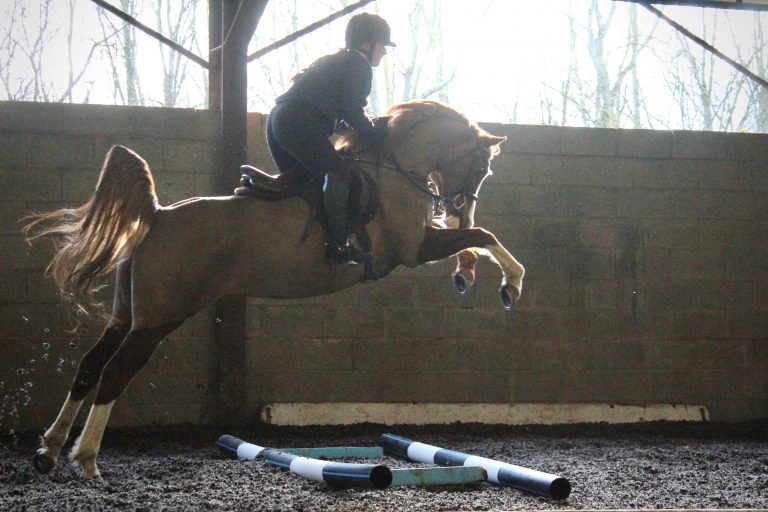 The Girl with the Jumping Arabs: A Quieter Month

With the freezing conditions early in the month and Equine Influenza sweeping Worcestershire throughout February, the Girl with the Jumping Arabs has settled for a quieter month than originally planned…

After our brief hiatus thanks to the lorry’s untimely blow-out, I was very much looking forward to getting the start of the season back underway and putting a winter’s worth of training to the test. Unfortunately for me and many other horse-owners, this year’s shortest month had some tricks up its sleeve to keep us grounded and itching to get the 2019 competition party started.
First came the frost. The arena was frozen solid, and the roads were icy which meant an impromptu holiday for the horses who were all fit and fresh for the start of the season. Once the lorry was back on the road, we took a lorry-full of horses to a local indoor arena that was available for hire to give them a jump and get the tickle out of their feet. Annia Aurelia (Marcus Aurelius x Bint Zaehaebi) – Penny – was first to be ridden and boy, was she happy! Penny has the most incredible work ethic and although she doesn’t have to be ridden daily, she loves to work and is the only horse in the barn who thoroughly enjoys every ‘Auntie Erica’ lesson. For her, their purpose is to show off everything she’s learnt and to learn new, exciting things from someone ‘who matters’, whereas the others see it as punishment and an exercise in re-taming them. After a week of not being ridden, Penny was surprisingly collected and saved her exuberance for the jumps that were dotted around the arena – especially the water tray that made me realise two metres of open water will be nothing for her when she’s older and focusing on showjumping and eventing!

Marcus Aurelius (Aurelian x Fiesta Magica) was up to jump next and exuded serenity as I rode, perhaps embracing his schoolmaster role in my string. So far this year, he has accompanied one of his young sons to his first shows, calmed another one of his sons in a busy and electric arena, and casually qualified for one of the more competitive unaffiliated showjumping championships, all while never being the only horse on my radar. Perhaps at rising 18-years old, he is finally beginning to step back and allow his offspring their time to shine? Or perhaps, in a couple of months’ time, my blog entries will consist of how Marcus has once again stolen the show and how we are bent to his will? In any case, it truly is typical that the stallion is the one who makes the best addition to the lorry while adding just enough humour to keep everyone laughing.

Waiting patiently for his turn was Avonbrook Odin (Marcus Aurelius x April), who dared not encroach upon Penny’s “I’m first” attitude, nor his father’s gentle reminders of who was actually in charge. Luckily for Odin, this meant that there were multiple sets of hands free to alter the fences into a larger and more technically demanding course, which he sailed around with no hesitations – of course! Being Odin, he did most of this while putting in little bucks and leaps to show off how excited he was, and there was a fair bit of sticking his head in between his knees while I sat very, very tall. I understand his misdemeanours as being incredibly positive; after his summer off with an injured neck and coming back into full fitness again at the tail end of last year, his ability to once again show off and have a laugh is indicative of both his physical and mental state. My aim with Odin this year is to compete in Riding Club qualifiers, go to some multi-day shows and just have lots and lots of fun!

With the horses buzzing and the winter freeze clearing, we were starting to build towards the show-stopping event of February: the British Riding Club Winter Area Showjumping Qualifiers, for which I was to represent Worcester and District Riding Club in the 110cm team with Odin and the 90cm team with Marcus. Then, it happened. Horse racing was shut down and the equine world closed in on itself due to an outbreak of Equine Influenza. Passports were checked, boosters were brought forward, strict regimes of disinfection between yards were implemented. As Avonbrook Stud is near Pershore in Worcestershire, we shut down movement completely to avoid the cluster of cases that walled us in. Not that we were moving much anyway, but our decision to play it safe and not take baby Rory – PS Ibn Aurelius (Marcus Aurelius x PS Silvern Silk) – to go showjumping at a local competition centre proved wise when a number of new local cases sprung up in the following week. Even with our competition horses fully vaccinated, it wasn’t worth any risk with a foal due this year and two superstar yearlings to think about. The area qualifiers were postponed and rather than whinging about going nowhere or taking unnecessary risks, I worked hard with the horses at home. As a result, Marcus is giving me the most incredible medium and collected paces and Odin is flying in his lateral work. I have also been able to work closely with Rory, who is developing beautifully and I can’t wait for his ridden showing debut this year! also has a lovely technique over a fence and hopefully there will be the opportunity to get him out and about more this spring.

Despite spending most of this month all dressed up with nowhere to go, I have been able to keep myself busy. Whenever university isn’t bombarding us with deadlines, presentations, and exams, me and my friends are staying active with twice weekly gym sessions and once weekly pole fitness. To put it into some context, I arrive at uni on a Sunday evening, go to the gym after Monday lectures, pole fitness after Tuesday lectures (well, it gives me options), and to the gym again after Wednesday lectures. I then go home after Thursday lectures because we have Fridays off and I think I might implode if I don’t see the horses after three days! I can’t say I’m seeing a difference yet but I’m certainly feeling it in my strength while riding and general fitness walking to and from campus. My aim is to fit back into my made-to-measure showing jacket before the Horse of the Year Show (HOYS) qualifiers start; I had it measured at HOYS 2018 when I was still just about at my summer weight and I could have cried trying it on the other month only to find that I could barely do the top button up! I have quite broad shoulders anyway, so I’ve been staying away from the weights at the gym, instead focusing on abs, legs, and cardio. If that doesn’t work, I will just have to cry and buy another jacket!

Katherine Bertram is an English young rider who competes in a variety of different disciplines on her mother’s homebred pure and part-bred Arabians. Having achieved advanced rider status in Endurance after her first season at age 14 on Marcus Aurelius (Aurelian x Fiesta Magica), Katherine turned her attention to showjumping with his progeny, at which she currently competes at Senior Newcomers (1.10). As well as also delving into showing, eventing and, occasionally, dressage, Katherine juggles her studies while attending the University of Birmingham.