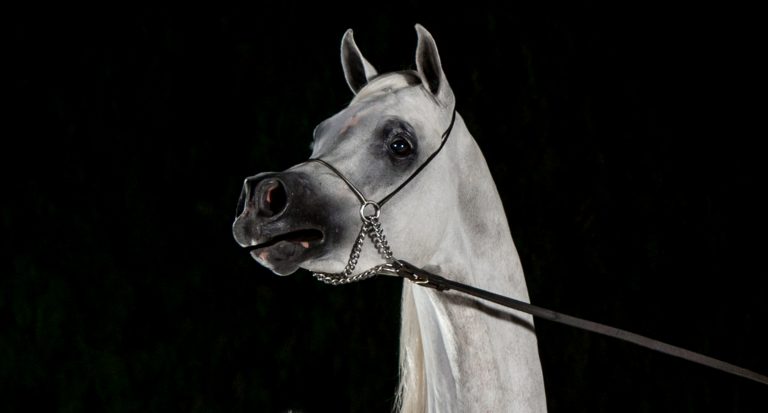 Om El Sinon is one of the hottest stallions in the United States right now. Bred and owned by the famous Om El Arab, Om El Sinon is truly living up to all expectations of him – and more.

Foaled in 2013, Om El Sinon was bred by the late Sigi Siller and her daughter, Janina Merz, who continues to manage Om El Arab today and is more than capably continuing to move the farm forward in its breeding programme. “When Sinon was born, we were excited by him,” Janina explains. “He is sired by WH Justice (Magnum Psyche x Vona Sher-Renea by El Sher-Mann), who stood here at Om El Arab for two seasons when leased by Aljassimya Farm. When he was born, he had that ‘Justice’ look – but he was also completely representative of our breeding programme.”

Om El Sinon’s dam is the amazing mare, Om El Shadiva. Her dam Om El Shaina (by Carmargue by White Lightning out of Velvet Shadow) was one of the most important Estopa (Tabal x Uyaima by Barquillo) daughters at Om El Arab, and her line remains an incredibly important one. Making Om El Shadiva more special is that she is sired by the great Sanadik El Shaklan (ex Mohena by Hadban Enzahi), a son of Om El Arab’s most famous stallion, El Shaklan (Shaker El Masri x Estopa). “The importance of Om El Sinon’s damline doesn’t escape me,” smiles Janina. “I love that we now have a son of the Shadiva line who is following in the same path as the other key sires at Om El Arab, which includes Om El Shadiva’s full brother Om El Shahmaan.”

Om El Sinon was presented at the Marquise auction in Scottsdale this February. Credit Stuart Vesty.

Om El Sinon is already more than proving himself in the breeding barn. “He is homozygous grey and I am so impressed with the standard of his foals,” continues Janina. “He consistently produces beautiful foals, and they have a very current look – but one that is steeped in history. His homebred foals mark five generations of Om El Arab breeding, and that is something I am very grateful for.”

One of Sinon’s most special foals to date is the 2018 filly Om El Alaminta. “I adore this little grey filly!” laughs Janina. “She is a Sinon baby through and through, and her dam, Alamina, is significant in our programme. She was bred by Janów Podlaski State Stud in Poland, who had her sire, Om El Bellissimo (Om El Shahmaan x Om El Benedict by Sanadik El Shaklan), on lease for two years. Alamina is out of Alameda (Wachlarz x Alejka by Palas), and Sigi spent a long time looking at the cross of Bellissimo on the Polish mares before making her selection. Alamina was the first new mare line brought to Om El Arab in generations, and she has not disappointed. Om El Alaminta is a beautiful example of Polish lines, combined with a lot of Estopa blood. I am very much looking forward to seeing her show.”

Om El Sinon is currently standing at Arabians International, and there are plans to show him at the Arabian Breeders’ Alliance World Cup in Las Vegas next month. “He will then return to Om El Arab,” continues Janina. “It will be wonderful to have him home again.”

Semen for Om El Sinon is available across Europe as well as the United States, and at his recent presentation at the Scottsdale Show in Arizona, the buzz around this young stallion grew even more.

“Om El Arab may be known for its mares, but we have also bred some incredible stallions,” concludes Janina. “From El Shaklan to Om El Sinon, we have continued to breed incredible Arabian horses that have enhanced breeding programmes throughout the world. To be part of that is something very special indeed, and for that I am always indebted to Estopa.”

For me, the Om El Arab breeding programme is unique as greatness follows from both sire and dam lines, and horses from this farm in the beautiful Santa Ynez Valley in California have been hugely influential on a global scale. There are few farms in the world that can still lay claim to that, and with Om El Sinon making his mark, it is clear that the next generation continues to provide something very special indeed.