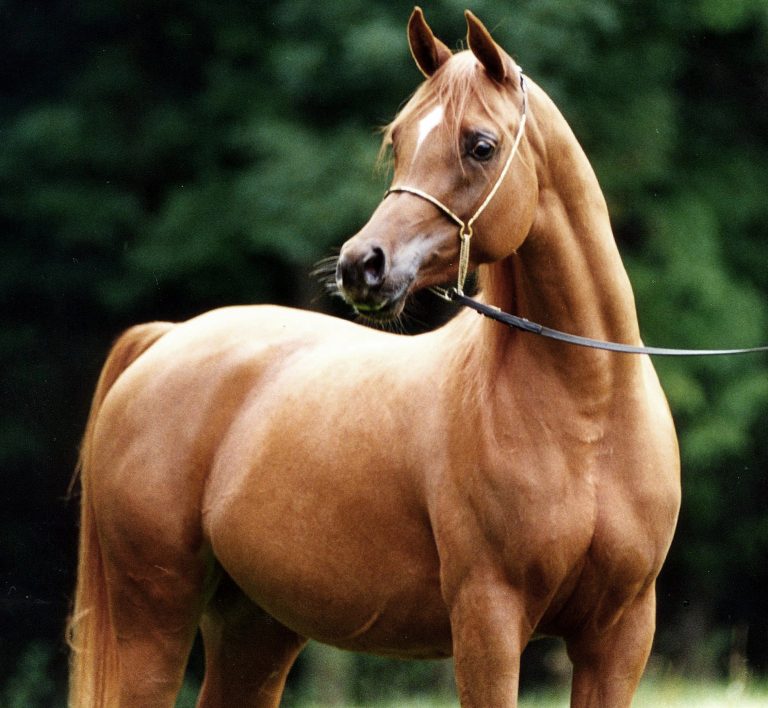 The first European Triple Crown Winner ‘plus’ filly in history, bred and owned by Sax Arabians, Germany, and foaled 30 May 1998.

In 1998, we celebrated the ten-year anniversary of Sax Arabians in Germany, owned by my husband Reinhard Sax and myself. However, we not only celebrated 10 years, we also celebrated the birth of an amazing, unbelievably beautiful chestnut filly. We named her Essteema, a name given after her sire, also the first European Triple Crown winner. His name was Essteem (Fame VF x Espressa by El Shaklan out of China Moon).

We had seen Essteem at the International Arabian Horse Show in Wels, proudly presented by a lovely, friendly, smiling blond young lady. It seemed that this stallion was easy to handle but came in the ring extremely elegantly and powerful. We were so impressed, that we called the owner of the stallion, Ferdinand Huemer, to find out if we could buy a breeding to him.

At this point, it is important to say that ours was a straight Russian breeding programme, and we had never bred to a non-straight Russian stallion before. So, it was time for a change after ten years breeding. The decision was made – we bred to Essteem with one of our Russian foundation mares, Menascha (Menes x Nascha by Neman out of Neschi). We could not have got a better result than Essteema!

Her arrival heralded a new era at Sax Arabians, as we forever changed from breeding straight Russian. Which was a good thing; we were open to other bloodlines, open for new breeders and horses, open for everything!

It was a good feeling. It was good for our future, something that has turned into an extremely successful breeding programme!

One thing that we remain proud of is that, to this day, we have never done embryo transfer on our mares. Each foal bred by Sax Arabians Germany stays with its own mother until weaning.

As a yearling Essteema, was proudly presented by Johanna Ullström. At each show they went to, they won. It was an unbelievable year for all of us! That year, 1999, Essteema was called Arabian Horse of the Year, and she was the first female to win the European Triple Crown – the All Nations’ Cup, the European Championships, and the Paris World Championships. They won at other shows, too, including Wels and the UK International Arabian Horse Show, each time champion.

Reinhard with his beloved Essteema

Indeed, Essteema has given birth to many amazing beautiful foals, but there was something in the air a few years. Altogether, I think we lost six foals under one-year old – one through an accident, one because of a fault by the vet. The others… It was very strange because we took good care with of them. I only write this because breeders talk, saying “that the mare is great – but she didn’t breed so well”. I don’t like to hear this about Essteema, she doesn’t deserve this!

Because all the foals she had were amazing. She carried them 11 months, she took care of each of them like a lion but too often, we lost them, even with everything we did to protect them. And each breeder can believe us, all of her foals were amazing!

Now, we are celebrating Essteema’s grandget. In January 2018, a very elegant and beautiful filly was born at our farm by Lamandro (EKS Alihandro x Lamana) out of Esskhija Bint Essteema. Her name is Lamandra, and she is a wonderful combination of some of the best of the Sax breeding programme. We can see Lamana (Laman HVP x Miriam II by Mirok Monpelou out of Merana), as well as Esskhija and Essteema.

It is just fantastic to see how the combination of our bloodlines combines together to create a new look in a newborn horse! It is like you look at yourself, your mum and your grandma, and then the same on your father’s side, and check to see which one comes through more! We love it!

That is the fantastic thing of breeding Arabian horses, and it’s amazing how much knowledge you learn over the years. As a beginner, you can only listen to breeders, something that I did a lot when we began. For me, the best example was the late Major Pat Maxwell of Lodge Farm. At the time, I truly was a beginner, I didn´t know anything about breeding, about bloodlines, and it was also not easy to understand the English slang!

Reinhard was invited to an Arabian horse show in Qatar and the welcoming words were: “Welcome Mr Essteema!” We both were known after the year 1999, having bred the first Triple Crown winning filly in history. How amazing!

In 2019, Essteema gave birth to an unbelievably beautiful colt foal by Lamandro. We have big hopes with this boy! He looks extremely special to us, as did Essteema from her first day on. We are already very taken by, and excited with, this young colt, Alessandro, foaled in March. He may just be the perfect birthday present from Essteema to ourselves.